To put the figure in perspective, even if we turned off the tap on fossil fuels immediately, “emissions from the global food system alone would make it impossible to limit heating to 1.5 degrees” and difficult to limit it to 2 degrees (Clark et al. 2020). Focusing efforts on emissions from electricity generation, transportation, and industry has brought results – but we cannot afford to dismiss the consequences of industrial agriculture as “just the cost of feeding the world.”

The IPCC report “Climate Change and Land” last year put the overall emissions figure from agriculture at 25% (and 50% for methane specifically). The report noted that incorporating the whole food chain, including fertilizer production, transport, and food processing, took the contribution to nearly 30% of greenhouse gases. More recent research published in Science this week pushes the figure to 30% without processing, transportation, packaging and so on. The IPCC report argued that a rapid transformation is needed toward sustainable land management. That would include processes like reforestation, rewilding (e.g., restoring wetlands and peat lands – which, like healthy soils, absorb and store greenhouse gases), and major reductions in land use for food animals and the grains that feed them.

The new Science report calls for five key strategies to dramatically reduce GHGs: (i) globally adopting a plant-rich diet [modeled as a diet rich in plant-based foods that contains moderate amounts of dairy, eggs, and meat, such as a Mediterranean diet]; (ii) adjusting global per capita caloric consumption to healthy levels [2100/ day on average, adjusted for various factors. By comparison, the current US average is 3600 – a 25% increase from fifty years ago]; (iii) optimising yields by closing yield gaps and improving crop genetics and agronomic practices; (iv) reducing food loss and waste by 50%; and (v) reducing the GHG intensity of foods. 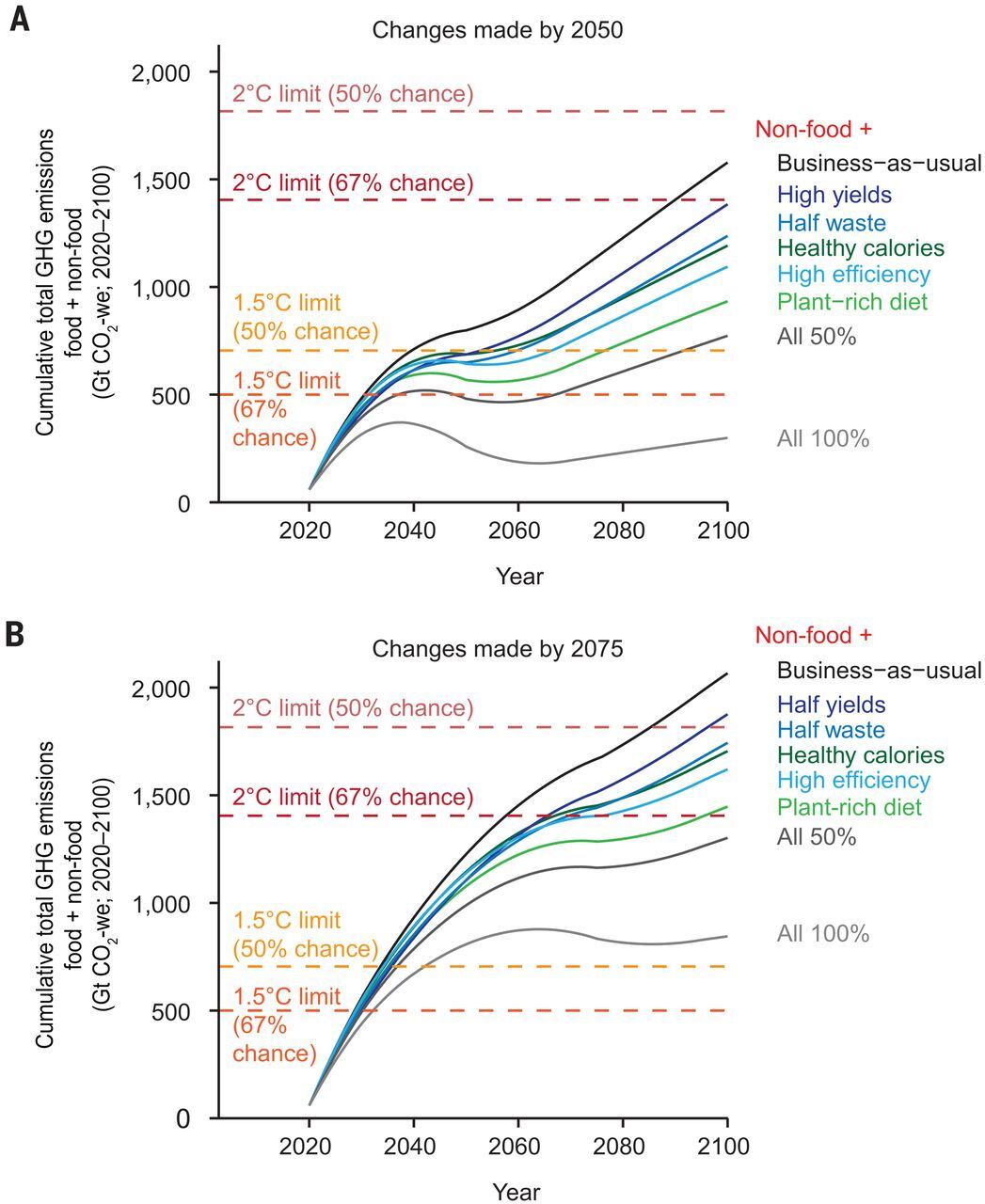 The focus on atmosphere in this study leaves out other key consequences of agriculture – impacts on biodiversity, soils, and water, for instance, some of which will be exacerbated by the cures proposed. Some of the strategies are controversial (e.g., genetic modification; reliance on chemical inputs), and the emphasis on individual behaviour (diet, calories) is troubling. Some are impractical: How on earth to achieve a global diet averaging 2100 calories? Even if it were possible, would the daily calorie budget be subsidized for wealthy people and regions, by the lower average intake of the poor? This ‘strategy’ seems likely to reinforce existing inequities whereby those least responsible for the crisis subsidize the ongoing profligacy of those most at fault. Practicality aside, the picture is of a need for major change: there are numerous opportunities to reduce food-system emissions to levels that keep us within 1.5-2 degrees of heating but, as the report concludes, “time is of the essence.”

And so to agroecology. As argued by a group of scholars who produced a meta-analysis of literature on relative yields for conventional and organic agriculture, the shift is not optional: a food system relying on practices that systematically undermine its essential components – soil, water, air – is a food system in existential crisis. “To maintain the Earth’s capacity to produce food, it is imperative that we adopt sustainable and resilient agricultural practices as soon as possible” (Ponisio et al 2015).* The alternative, as all these reports insist, is fast coming into view.

The question that plagues agroecological farming is whether it is up to the job. Can agroecological methods feed the world? The assumption is that a growing global population requires the kinds of highly productive and efficient monocultures pioneered during the Green Revolution of the 1950s-70s. The assumption is flawed on many levels, one of which is the fact that those yield improvements persisted for a decade or two (depending on crop) and then plateaued – at about the time the social and ecological effects of the techniques began to come into focus. (Rachel Carson’s Silent Spring was an early harbinger; epidemic farmer indebtedness, farm loss, and in some places widespread farmer suicides came a little later). A growing body of evidence demonstrates that adoption of sustainable, agroecological methods of food production does not mean declines in yield. The analysis by Ponisio et al, for instance, shows that simple practices like crop rotation and intercropping dramatically reduce yield gaps of between 15 and 19% that have long been taken as given by conventional farming interests. The authors found such gaps to be common in cereal crops (which are the subject of most comparisons) – but they point out that the gaps are hardly surprising, “given the extensive efforts since the Green Revolution to increase cereal yields by breeding high-yielding cereal varieties adapted to work well with conventional inputs”: the level of research and development focused on conventionally-grown high-yield cereals eclipses the paltry sums invested in research into improving organic and other sustainable cereal production. As they note, “appropriate investment in agroecological research to improve organic management systems could greatly reduce or eliminate the yield gap” for some crops and regions (Ponisio et al, 2015). Perhaps this is the gap most in need of attention.

Just as agriculture has been plagued in the post-WWII era by monocultures, it has also been plagued by a monofocus on yield. In a world where 30-40% of all food produced goes to waste, and where many people (for reasons both of wealth and poverty) consume far more calories than are needed or healthy, yield is not the limiting factor. The small-scale farmers of the Global South who, in a cruel irony, make up the largest proportion of the world’s malnourished, would benefit from yield improvements – but not improvements reliant on expensive external inputs (chemical fertilizers and pesticides and the hybrid seed that demands those treatments). They need support to experiment with locally-adapted agroecological methods – what Mphephu at Hleketani Garden calls “the ways of our mothers and grandmothers,” adapted to the new climate realities.

*The mathematical meta-analysis comprised 1071 organic versus conventional yield comparisons from 115 studies—over three times the number of observations of any of the previous analyses. The meta-dataset included studies from 38 countries and 52 crop species over a span of 35 years.

Altieri, Miguel and Clara I. Nicholls. “Agroecology and the reconstruction of a post-COVID-19 agriculture.” The Journal of Peasant Studies, 47:5, 2020.